The new Reformation Window on the east side of the Franklin Street narthex highlights three reformers of the Protestant Reformation in the 16th century.

Martin Luther (1483-1546) is shown in his humble monk's robe as he has finished nailing the "Ninety-five Theses" to the door of the church in Wittenberg in 1517.

He holds the hammer in his right hand and behind him can be seen the "Theses." This act sparked a revolt against practices in the Roman Catholic church of Luther's time.

Luther was born November 10, 1483 in Eisleben, Germany. He dedicated himself to monastic life, devoting himself to fasting, long hours in prayer, pilgrimage, and frequent confession.

He published his German translation of the New Testament in 1522, and was a prolific hymn writer. He was also a priest and theology professor.

After suffering from ill health for years, his last sermon was delivered at Eisleben, his place of birth, on 15 February 1546, three days before his death. 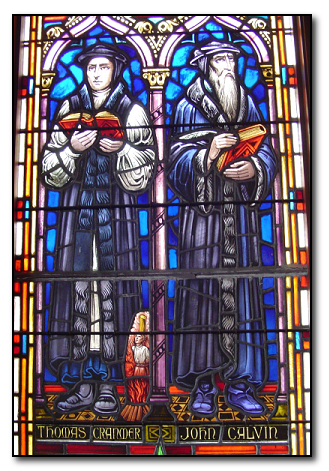 Thomas Cranmer (1489-1556) was Archbishop of Canterbury - a scholar and theologian. The open book Cranmer holds perhaps represents the Bible since he, at the order of Henry VIII, was responsible for one of the translations into English.

Cranmer was also instrumental in the preservation of many old manuscripts.

Mary I of England had Cranmer burned at the stake for his religious belief. The inset in the window depicts his martyrdom.

John Calvin (1509-1564) was a boy in France when Martin Luther revolted against the Roman Catholic Church.

Calvin grew up to succeed Luther as the leader of the Reformation.

Calvin holds a closed book and feathered quill to represent his writings and influence on the Protestant Reformation.

Calvin's teachings form the basis of the Presbyterian and Reformed churches.