The Judge P. W. White House, also known as the Methodist Parsonage, is on the U.S. National Register of Historic Places >>Read More 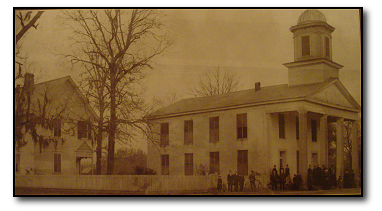 There was a Methodist "Mission" work here in Quincy during the 1820's, but a wooden building known from public records as a "House of Worship for the M in Quincy" was erected during the "thirties." The year 1839 was eventful for the Methodist congregation because a new church was erected on the corner of Madison and Franklin Streets. The lot was given by Joseph McBride, and a church tablet may be viewed today bearing the historical fact. The second church building was a colonial type made of brick and stuccoed with white cement. Green b accentuated the windows at the upstairs and downstairs levels. A steeple housed the bell that is prominently displayed on Madison Street today while a wide porch covered the front supported by colonial columns. A large gallery covered three sides on the interior and Negro worshipers filled these, using a wooden partition down the center aisle to separate the women from the men. The pulpit was high and supported by six stairs on each side while the organ was in the opposite end from the pulpit. The architect and builder was Madison Wilson, described as a "grand and stalwart man among pioneers." 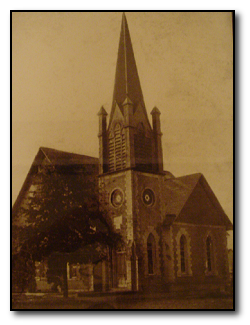 In 1895 the church was condemned when a defect was discovered in the south wall. The second story was sawed off and a one story structure replaced it in 1896. It was red brick and constructed along Gothic lines. An unusually tall steeple contained the "old bell." For the first time stained memorial glass was introduced to the building.

The congregation was busy, even the children, in fund raising projects, with mite boxes and hand embroidered quilts. Plays were presented and church festivals held to add to the building fund. The festivals- were held on the court house square and in the former wooden church building.

Miss Rebecca White, affectionately known as "Miss Pinkie", played the organ - quite a physical and mental chore since the bellows had to be manipulated by foot pedals. The church was carpeted with beautiful red carpet which was purchased by the Parsonage Aid Society. This project capped a period of fish ponds, grab bags, popularity contest and cake auctions, all to help pay for the Methodist Church of 1896. 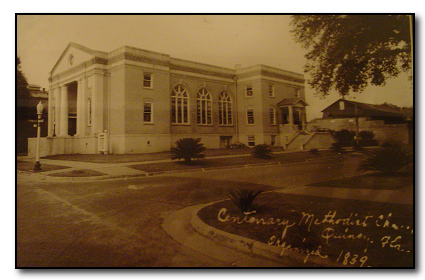 City authorities once again condemned the church building in the year 1916, so the membership was challenged to build a bigger and better one. The first church used by the Methodists was a wooden building; the second, brick stuccoed in white; the third, red brick. The year was 1917 when work began on the fourth Methodist Church and the third on the present site. This building was cream brick with white stuccoed trimmings. Two large white Doric columns graced the front entrance. Hal Hentz of Atlanta was the architect and J. P. Haigler, the builder. Due to the World War, financial plans for the church were not carried out much to the disappointment of Mr. Hentz and the congregation. The beautiful memorial windows and pews from the Gothic structure were used. However, no place was made for the old bell as in the two previous buildings. This brought sadness to the group of Methodists. While the church was being built services were held in the Court House. The building was completed in 1918 and a Pilcher pipe organ was installed, the first pipe organ to be placed in a Quincy church. ORGAN The Organ was designed and built by the Schlicker Organ Company, Buffalo, N.Y. in consultation with Doctor V. Earle Copes and Mrs. E. B. Shelfer, Jr. The instrument consists of three divisions, great, swell and Pedal. There are forty stops on the three divisions of the 807 pipe instrument. The organ console is at a lower level facing the choir. In the absence of a choir director the organist can direct the choir from the organ bench. 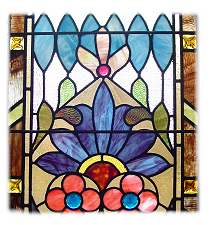 The stained glass windows of Centenary United Methodist Church are the crowning glory of the sanctuary to members and friends of the church. There is no single article of worship which bears the same significance to most of us as the Tiffany window "Light of the World," for this "Light" has been a beacon to us through times of joy, sorrow, tribulation and restoration. There are many factors to be considered in a project such as "Restoration: 1976 - 1977," but many of us feel that the presentation of our heritage was foremost in the hearts and minds of members of our congregation. It was the intent of Centenary's members to preserve and restore the sanctuary while retaining its beauty and worshipful atmosphere and to eliminate some of the features that reduced the sanctuary's usefulness. It was the intent of the building committee that this purpose be fulfilled, and to this end the building committee, members and friends have worked. This article tells something about five windows of the sanctuary - three new ones and two of the original ones. The reader will gain a fuller understanding of the meaning of the "Christian Symbols" if he refers to the pamphlet by this title furnished by the church and if he devotes some study to locating the symbols and symbolic use of colors.

"Since the year 312 A.D. when Christians were first permitted to express their faith openly, beauty and worship have 'gone hand-in-hand," states the Almy Company, makers of the exquisite new paraments of the altar area of Centenary. These paraments have a basic purpose - to enrich and beautify this sanctuary. All of the paraments are made from ecclesiastical damask bemberg in two patterns - the Agnus Dei and Normandy. Agnus Dei means "Lamb of God." This pattern has woven into it symbols representing God or the Trinity: Lamb of God, IHS, Fleur-de-lis and vines with grapes are some of the symbols a study of these paraments will reveal. The Normandy pattern features the rose, a symbol used in Christian art in many forms. 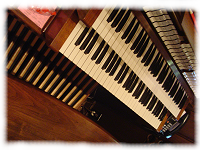 The organ was designed and built by the Schlicker Organ Company, Buffalo, N.Y. in consultation with Doctor V. Earle Copes and Mrs. E. B. Shelfer, Jr. The instrument consists of three divisions; great, swell, and pedal.

There are forty stops on the three divisions of the 807 pipe instrument. The organ console is at a lower level facing the choir. In the absence of a choir director, the organist can direct the choir from the organ bench.

The prayer cushions at the altar have all been hand-sewn by church members and bring with them an abundance of history, beauty, representations, and stories. 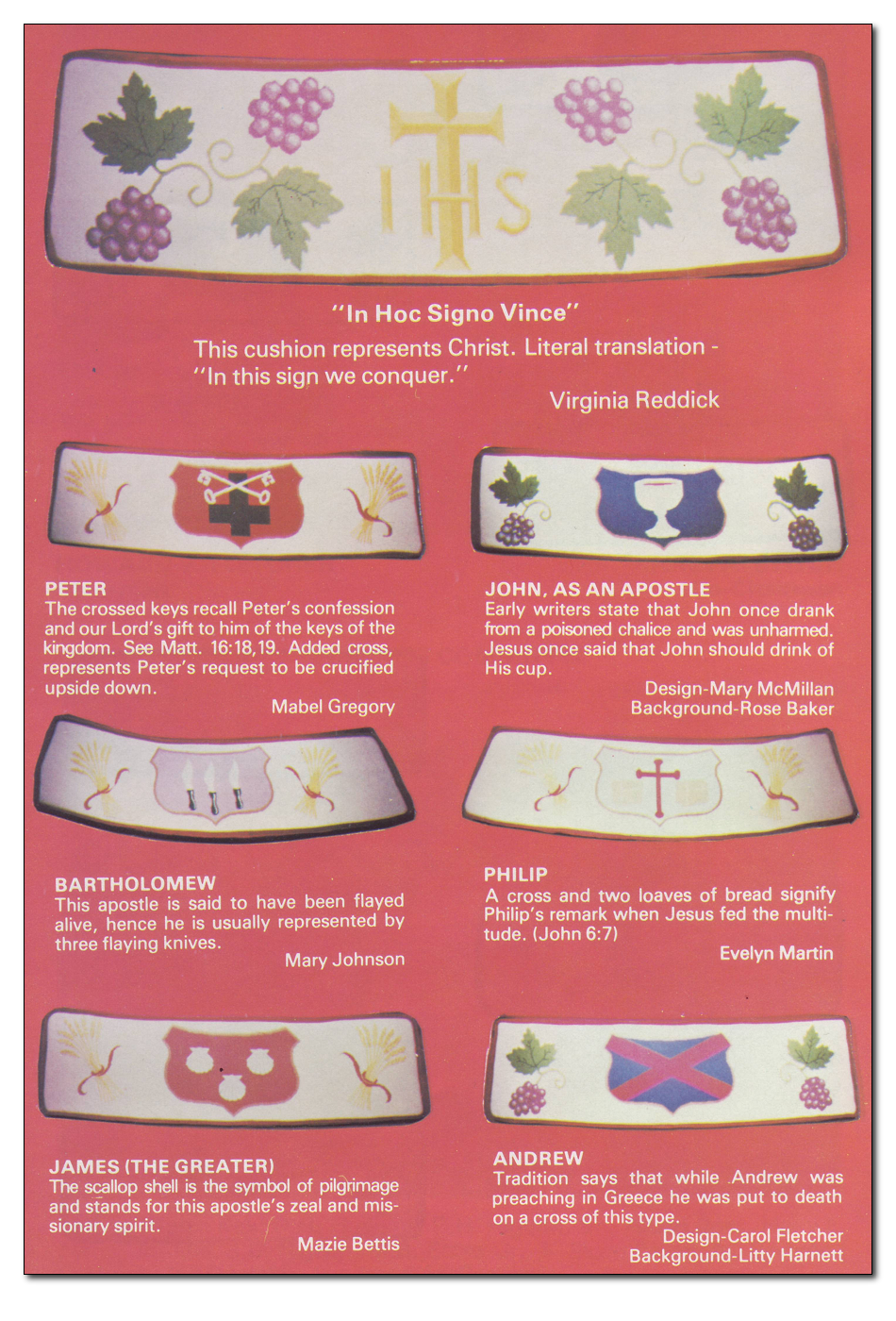 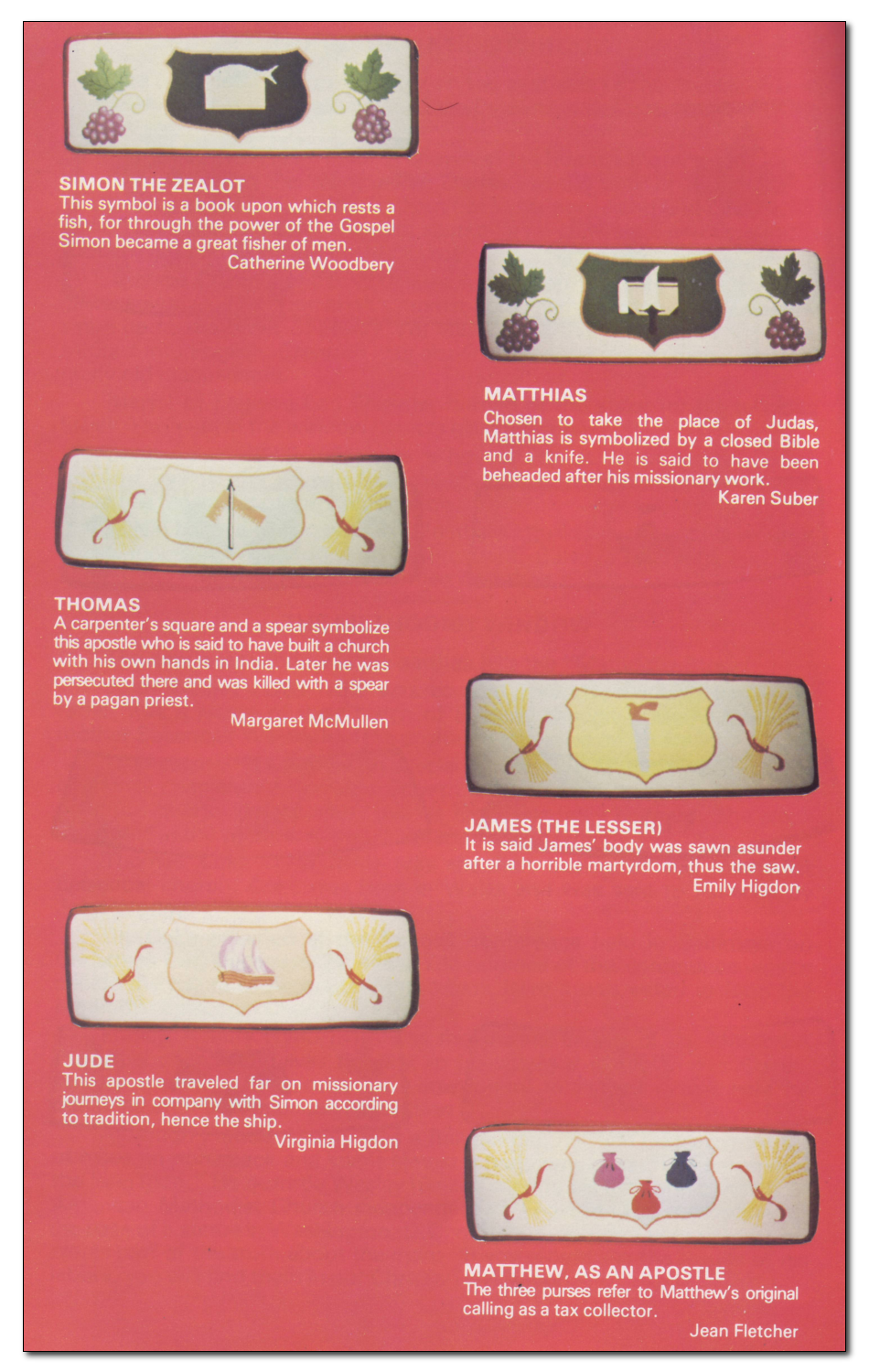